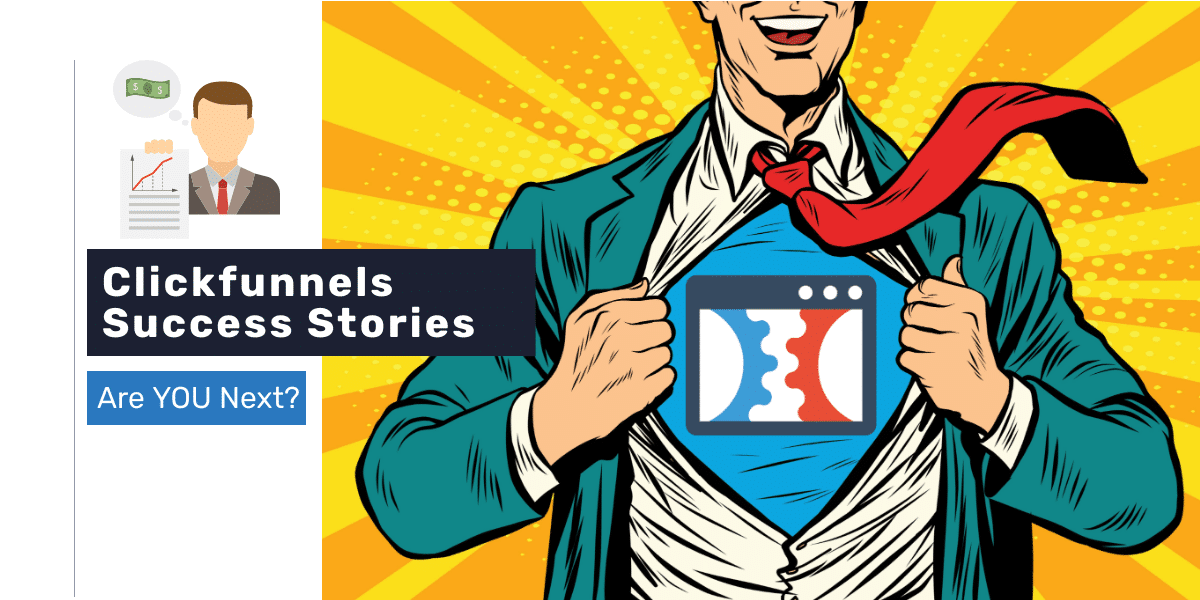 There are few businesses more personal than the small online business, and it can be hard to find a story that truly speaks to all the joys and challenges of starting and running a successful online business. That’s why we went out and found 9 Clickfunnels success stories that are truly inspiring.

Here are the 9 best ClickFunnels success stories to get your entrepreneurial 🔥 raging…no matter what industry you’re in:

From making millions as an online marketer to helping non-profits reach their goals, this is a diverse group of stories that show the power of the software and the power of the Clickfunnels community.

Smart work breeds success as you will learn in this article. Read on to discover how these individuals made it and how you can adapt their lessons to your situation.

Julie is a successful agency owner and freelancer who started from rock bottom. One day in 2014, her life crumbled. She was going through a tough divorce and was pregnant. As if that was not enough, she had no money.

This meant she could not provide for her children and had to give up custody temporarily so that she could organize her affairs. She did this in exactly 157 days by setting up her marketing agency business successfully. This enabled her to reclaim custody of her children.

Her biggest break came when one of her clients insisted that she had to take up a ClickFunnels course. Though hesitant, she accepted and was immediately smitten by ClickFunnels. The fact that you could create sales funnels without any coding knowledge was mind-blowing.

Julie began creating sales funnels for her customers using ClickFunnels and they all loved it. She joined the CF affiliate program, and dollars started flowing in. She was making more as an affiliate than from her agency. She started being choosy regarding whom to work with. The more she shut off prospective clients, the more they wanted to work with her.

Eventually, her ClickFunnels commission hit five figures. She was the first woman to get the ClickFunnels affiliate dream car incentive. She rakes in a seven-figure income from the CF affiliate program and her other businesses.

Natalie Hodson had a difficult childhood given that she is the firstborn of 10 children. Her mother was always in and out of prison which made her mature up quickly. Even as an adult, she had difficulties coping with life.

One day she suddenly realized she needed to do something to maintain her sanity. Many things were happening in her life: a divorce, co-parenting, body image, and identity. All these made her feel vulnerable and so she started a blog to release the stress and pain she was experiencing.

She would share stuff for the women audience on her blog and FaceBook page because she wrote what she was experiencing in relatable, raw topics. Every month, Natalie received 3 million visitors on her social channels and blog. She knew she could monetize her blog and other digital products.

Around the same time, Russell Brunson urged her to use sales funnels to ease her work in the monetization process. Though skeptical at first, she used ClickFunnels and the rest became history. She made a $5,000 sale in a day from an e-book she wrote. In just four months, she sold $ 1 million worth of eBooks, thanks to ClickFunnels.

She no longer had to worry about providing for her children. Instead, she wrote more e-books targeting women. These were stories that were too shameful to be shared. She also made training programs and blogged about cooking.

Natalie is the owner of the Peak Business Academy and she sells membership sites, courses, and eBooks. She is an influencer, in-demand speaker, and podcast host.

Jaime Cross is a mother of five boys who grew up on a ranch. She learned to survive under hard conditions during her childhood. When she grew up, she worked as a banker and the husband was a teacher. At some point, she stopped working to raise her newborn.

This decision made life difficult as the family’s income reduced. By then, her husband was doing odd jobs that could barely meet their basic needs. Many are the times they survived on plain pasta without sauce.

Eventually, she founded a skin product business after her pastor gave her revelation, which was reinforced by a vision from God on how to go about it in 2010. After a lot of research, her business, Mighty in Good (MIG), was born in October 2010.

Jaime makes soap, lotions, and other skincare products. She sold her products in farmers’ markets for four years. When she felt she had reached her peak, she decided to widen her reach through the internet.

She again researched on internet marketing, as it was a new world to her. Her breakthrough came in 2017 when she paid for and attended a ClickFunnels event named Funnel Hacking Life. The great exposure transformed her mindset and skyrocketed her business.

She was able to make sales of $100,000 in the first six weeks following that event. In six months, she had made $1 million in sales. Jaime has since joined the Inner Circle for Life, a mastermind group for Russell Brunson, the co-founder of ClickFunnel.

As a P.E teacher at 22 years of age, Garrett White knew he would never be able to provide fully for his family. He was always broke. At 24 years, he had divorced and was recovering from cancer. Upon full recovery, he entered the business world and succeeded.

He became a millionaire at 28 years through his mortgage brokerages. When the US housing sector experienced a slump, his businesses came crushing. At this time, he was also having problems with his wife who was threatening to divorce him.

All these weighed in heavily upon him and he realized he was living a lie. After much soul-searching, he changed his approach to life by being honest with himself. He altered the way he worked and availed himself more to his family.

He started noticing positive changes, which informed his decision to help other male executives. He now runs salons and coaches businessmen to balance their work /life by devoting enough time to their families and not just their businesses.

He says, “Clickfunnels helped me reach out to so many men who were hurting.” Before that, Garrett would always hope that all his digital assets would function, that is, his membership sites, WordPress, sales pages, integrated funnels, and second funnels.

One of his clients enlightened him about ClickFunnels and he has never looked back. His business became more organized which led to exponential growth. He no longer had to worry about things falling apart because ClickFunnels took care of everything including the funnels and lead generation. It allowed him to concentrate on his core duty.

Mindy Saunders and Mandy Leslie are identical twins who teamed up to sell beauty products. After selling to their family and close acquaintances, they hit a wall. They realized they had exhausted people to sell to.

This is when they decided to learn network marketing to scale their multi-level marketing business. During their research, they encountered ClickFunnels that changed the course of their business. Because of CF, their relentless search for leads ended.

Sales funnels guide people into willingly providing their emails, and these are pre-qualified leads. They now say, “CF makes people come to us instead of us going to them.” Their success rate is high since they began using ClickFunnels. Their only regret is that they did not begin 10 years earlier.

Yanni is your typical handyman in the locality that started as a painter. His father wanted him to be a lawyer but his passion was in painting. Yet, deep down he knew that to make significant amounts of money, he needed to do many jobs (as a painter) to make it. This saw him doing any job that came his way.

He later registered that this was not helping either as he could only do so much on any given day. Yanni decided

He started advertising online with his limited knowledge of internet marketing. One day, a friend told him about ClickFunnels. Yanni started creating his sales funnels, which were ugly, compared to others, as he didn’t know how to do it.

Then it dawned on him that with each funnel he needed to sell just one product or request one piece of information. He fell in love with funnels as they let him decide what to do or sell. ClickFunnels has helped him save on advertising costs while increasing his profits and revenues.

James was getting increasingly frustrated about hiring all the time. His employees worked badly leading him to the conclusion that good workers were expensive and unavailable. Amid his frustrations, somebody suggested that he try ClickFunnels.

What he saw on ClickFunnels made him happy as he did not have to deal with a clumsy team anymore. CF could be systematized and was easy to use. The sales funnels helped capture more pre-qualified leads that led to sales.

He did not need to worry about developers, and his team could now deal with the qualified leads from the sales funnel. ClickFunnels brought tangible results as James started getting 4500 leads each month.

10-15% of these leads were warm as they went a step further of filling a form that said they were ready to talk to someone. Talking to someone meant being ready for sales. ClickFunnels had solved his problems, as it was reliable and efficient.

Sarah is a popular food blogger who is passionate about food. She co-runs a successful Best Bites blog that began as a hobby. Their blog was an instant success, which saw them include health plans, menus, and food-related stories.

They had many ideas for their blog but lacked a system of delivering them to their many followers. At one point, they created a program to streamline their work but it was difficult to learn how to use and implement it.

At their point of frustration, they came across ClickFunnels, which was easy to use. They ditched the other program, fully embraced CF, and success followed. To them, ClickFunnels was compatible to their blog with nothing new to learn. It effectively uses the already published content.

As an Executive Director of Forest Cliff Camps, Tyler Shaule is in charge of Christian camps that train and impact kids over summer. On one occasion, they had a problem of dwindling numbers. If they didn’t change their strategy they would have to shut their camps.

Tyler had grown up attending summer camps and had even met her wife there. There was no way he was going to see them close down. He knew the value they offered children.

He went online and tried to figure out how to grow the numbers. Luckily, he discovered ClickFunnels, which had a systematic way of helping him devise a pathway for communicating with parents. The sales funnels were superb in marketing such that they caught the attention of parents and they signed up in big numbers.

He went from being desperate (to the point of almost shutting down the camps), to registering 1500 campers. ClickFunnels did it for them. They were able to get $600,000 in revenue that time.

Tyler and his team no longer have a problem with campers. Instead, their problem was how they were going to establish more camps to accommodate the ever-growing number of campers.